I am writing this partly because of the oddity of what was on the map I was looking at and that it might be worth five minutes of your time.

I was looking at Google maps and I came across a part that was divided off by an international border but wasn't marked with a country name.

It was surrounded by Armenia, Turkey, Azerbaijan, and Iran. So what country was it?

My first thought was to zoom in, in case a country name popped into view, but it didn't.

I googled the name of the largest town/city (Nakhchivan) and I found out the region is the Nakhchivan Autonomous Republic, an autonomous enclave of Azerbaijan.

It is separated from the rest of Azerbaijan and completely surrounded by other countries: hence it being an enclave. 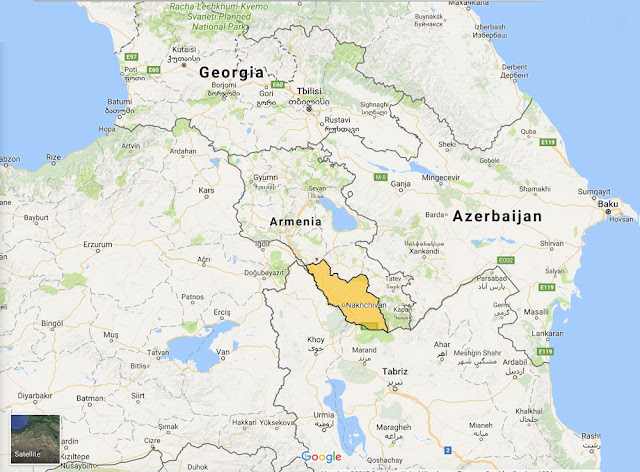 A bit more googling and I found out it was formerly owned by what was then Persia (now Iran) and then in the early 1800s after the Russian-Persian war, by Russia.

That changed again with the 1917 Russian revolution when it was contested by Armenia and Azerbaijan.

Fast forward to 1990 when it declared independence from the USSR to show solidarity with the nationalist movement in Azerbaijan, and the following year it declared itself the Nakhchivan Autonomous Republic within the newly independent Republic of Azerbaijan.

So it is an autonomous region of Azerbaijan. Now we know.

That decision to ally with Azerbaijan resulted in conflicts and cross-conflicts with Armenia, Turkey, and Russia - who all had an interest in the outcome in terms of with which country the region would associate itself.

Google maps doesn't have a street view of the point at which Turkey, Iran, and the Nakhchivan Autonomous Republic meet. Is it bristling with guns and tension or is it a backwater? Who knows? It must be interesting travelling from the Black Sea to the Caspian Sea along this route...

It is internationally recognised as being part of Azerbaijan but is run as an independent state by the Armenian ethnic majority. Not being a country, it isn't marked on most maps, but it exists.