Re: Jeremy Corbyn, leader of the Labour Party of the United Kingdom.
Jeremy Corbyn's website says there are no references to Palestine and no links to articles on Palestine. There were, though. Why are the articles no longer there?
Here is the text of the article and the link to the WayBack Machine that shows the article as it was on 24 August 2015 and 23 September 2015 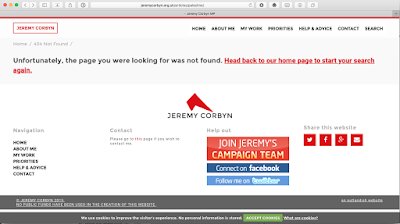 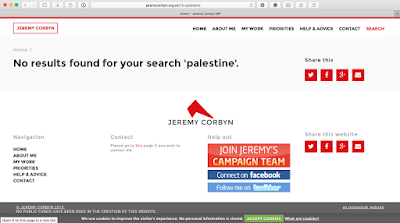 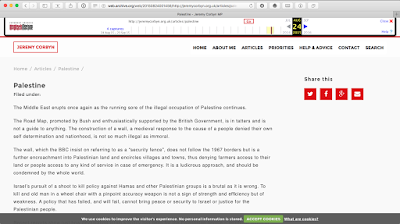 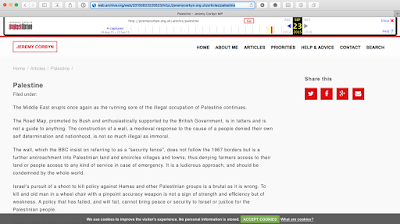 Palestine
Filed under:
The Middle East erupts once again as the running sore of the illegal occupation of Palestine continues.
The Road Map, promoted by Bush and enthusiastically supported by the British Government, is in tatters and is not a guide to anything. The construction of a wall, a medieval response to the cause of a people denied their own self determination and nationhood, is not so much illegal as immoral.

The wall, which the BBC insist on referring to as a “security fence”, does not follow the 1967 borders but is a further encroachment into Palestinian land and encircles villages and towns, thus denying farmers access to their land or people access to any kind of service in case of emergency. It is a ludicrous approach, and should be condemned by the whole world.

Israel’s pursuit of a shoot to kill policy against Hamas and other Palestinian groups is a brutal as it is wrong. To kill and old man in a wheel chair with a pinpoint accuracy weapon is not a sign of strength and efficiency but of weakness. A policy that has failed, and will fail, cannot bring peace or security to Israel or justice for the Palestinian people.

Recent reports show just how devastating Israel’s policy has been for the Palestinian people – terrifying levels of poverty, malnutrition, unemployment and lack of health and education are the lot of the Palestinian people. The Israeli incursions into Palestine have killed civilians and children using modern, effective and sophisticated weapons. It is not a war of equals but of occupation by the military of a first world state against the poor who live in third world conditions.

The other effects are less obvious: 5,000 Palestinians are held in Israel prisons and detention centres. 1000 of these are young people and 350 children under 16. The army attacks in Palestine kill unarmed people, as they did in Rafah, people who are merely defending their homes against Israeli army bulldozers.

In an attempt to save children Tom Hurndall, and international peace monitor was one of many who have laid down their lives for others.
None of this brings peace to Israel where the security measures are huge and a national psychosis against suicide bombers does not make anyone feel secure in any way. Yet the US and British Governments cannot it seems bring themselves to condemn Israel for either its numerous breaches of existing UN resolutions or the latest assassination of Sheikh Yassim. Britain abstained whilst the US used its veto on the Security Council.
To gain some idea of the thinking behind the US strategy it is worth looking at a 1996 paper written by an academic group, all of whom are now close to President Bush. Above the signatures of Richard Perle, Charles Fairbanks of John Hopkins University and Robert Lowenberg, of the Institute for Advanced Strategic and Political Studies comes a bizarre and interesting analysis.

Claiming that the problem with Israel is “Labor Zionism” it was, in effect, an advice note to the then new Netanyahu Government. In the document it envisages supporting a policy of “hot pursuit” of Palestinian fighters, taking the war to Syria, focussing on removing Saddam Hussein, destabilising Jordan. It concludes by calling for the liberalisation of the economy through privatisation, tax cuts and selling state lands. It sees Israel as a kind of free market powerhouse and US economic base in the region. Nothing in the paper acknowledges the rights of Palestinian people or the appalling human conditions under which they live as refugees in their own land. The US continues to give almost unlimited military and economic aid to Israel; in effect its guarantor and the UK, though the provision of diplomatic support and arms sales is also implicated.

Peace in the Middle East can only be achieved through justice for the people of Palestine. The occupation, wall and assassinations are no solution.

PSC are holding a Rally for Palestine on May 15th in Trafalgar Square from 1.30pm with speeches, music and stalls. Come and support the Palestinian people.
Related